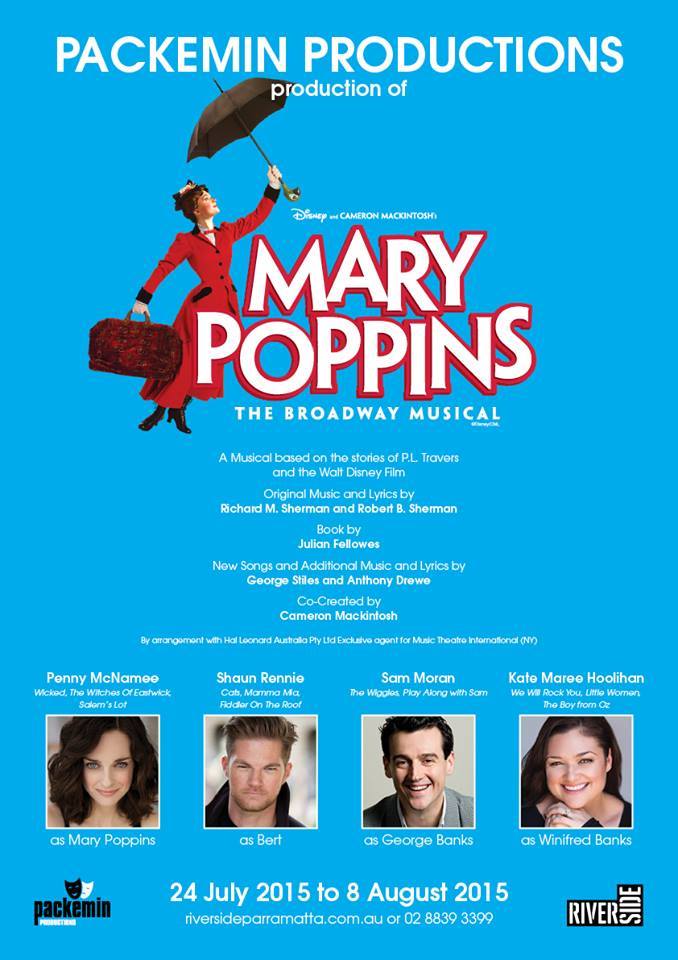 
Brilliantly adapted from the beloved books by Australia's own P.L.Travers and the classic 1964 Walt Disney film, Packemin Productions invites you to let your imagination take flight as you step into the magical world of Disney and Cameron Mackintosh's Mary Poppins.

The jack-of-all trades, Bert, introduces us to England in 1910 and the troubled Banks family. Young Jane and Michael have sent many a nanny packing before Mary Poppins arrives on their doorstep. Using a combination of magic and common sense, she must teach the family how to value each other again. Mary Poppins takes the children on many magical and memorable adventures, but Jane and Michael aren't the only ones she has a profound effect upon. Even grown-ups can learn a lesson or two from the nanny who advises that "anything can happen if you let it."

With some of the most unforgettable songs of all time including Supercalifragilisticexpialidocious, Feed the Birds, A Spoonful of Sugar and Chim Chim Che-ree, Mary Poppins is a musical that will charm the whole family. Featuring stunning choreography, sets and costumes, this brand new production by Packemin Productions will be an extraordinary theatrical event.

"Packemin Productions had a cast which did justice to the spectacle. The visiting professionals, Penny McNamee as Mary Poppins and Shaun Rennie as Bert, were charming." - Stage Whispers

"from start to finish, Penny McNamee is wonderful in the title role. She demonstrates a lovely soprano range...her nuanced performance helps her succeed in capturing an indescribable other worldly quality to Poppins" - Theatre People